“…and
gold-bright there
Stands Valhall [sic] stretching wide…”
from Grimnismol: The Ballad of Grimnir, part of the
age-old oral tradition of Norse mythology

The rock faces of the Valhalla mountain range catch the sun’s light as it works through its daily rotation, reflecting their namesake’s godly description. If you’re not familiar with Norse pagan beliefs, Valhalla is the fortress of Odin — one of the primary Scandinavian gods from ancient times — where the souls of brave warriors live on in the afterlife.

According to Odin, his beloved Valhalla could be seen “shining and rising peacefully when viewed from afar”. He might as well have been describing the range in West Kootenay of the same name.

But get closer to the Kootenay version and its spires — the ones that seem so peaceful from afar — and you’ll discover the formidable. Placed under the gaze of peaks such as “Gimli” and “Asgard”, names also taken from the pagan religion, you’ll fall deep into the realm of the gods and come to grips with your mortal scale.

It is this marriage between nature’s peaceful view and its daunting scale that draws the adventurous human to the Kootenay Valhallas.

That and the present-day legends of Powder Highway snow.

That legendary snow also falls in accord with Scandinavian mythology. According to the gods, the earth’s final days will be preceded by three successive winter seasons, after which the brave warriors within Odin’s Valhalla will stream from the fortress and into a final, earth-destroying battle.

Though the Kootenay counterpart for Odin’s Valhalla palace takes shape in uninhabitable cliffs and steep, alpine pitches that dissolve into forests, there is a peaceful, four-walled Valhalla alternative that the brave can call home for a week at a time.

Beneath Urd Peak — named after a goddess and the well she tends, a well that waters the tree that is the centre of the Norse gods’ universe — sits Ice Creek Lodge, a Kootenay family’s hand built labour of love. It is at this lodge that modern-day warriors can rest after a day of battling winter within the Valhalla region. 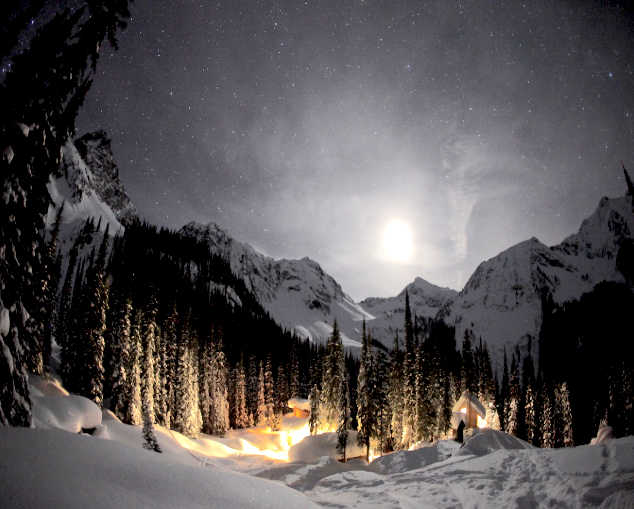 And it’s here that the Norse mythology continues its parallel with the contemporary: Hinting at the Urd’s mythological well, Courtney Hulbert, co-owner and office manager of Ice Creek Lodge, says, “There is a spring just below the lodge which we still don’t know where the intake comes from — bit of a mystery.” Describing the water as the best in the world, it is this mysterious spring that provides the lodge, and its guests, with its water needs.

And the guests have to work for it. “Groups must haul water to the lodge, which proves to be daunting after big days of shredding,” says Courtney. So she turns to the Norse mythology that surrounds her and lets the tale of Urd, and her well, be an inspiration to draw up the week’s water.

“At the beginning of each week, guests hear the ins and outs of [living at Ice Creek Lodge] and are told the story of the Urd well. People find it so magical and sacred that it becomes a place to sit and enjoy, and you kinda forget about the hard labour of it all.”

Courtney calls the magical presence that resides at the spring and the Valhalla surroundings the “Ice Vibe”, describing this vibe with words such as “pure, magical, unplugged, family, quiet, peaceful, and still.”

“Guests become part of the family,” says Courtney, giving examples of guests helping gather firewood, haul water, shovel snow, and helping to clean up after meals. Not only are they invited to be involved in the processes of the day, they are given a chance to become part of an ancient mythology, one that the surrounding Norse giants — taking form in mountain spires — provide.

“They get to disconnect from their busy lives to connect with each other, nature, the mountains,” says Courtney. Of the experience of being in a place of the gods, she says, “It is humbling to say the least.”

Know Before You Go!

~ Take extra time to research and plan your trip in advance. Many of our tourism businesses and services have adopted new COVID-19 protocols and changes to their schedules or policies to ensure your safety. You’ll want to become familiar with them ahead of time.

~ If you normally travel with extended family or with several friends, consider travelling in a smaller group this winter. Travelling with fewer people makes it easier for you to practise physical distancing in public and may have less of an impact on the destination.

~ Consider a slower travel pace this winter to help curb the spread. Instead of checking in and out of multiple destinations during one trip, choose one or two destinations and one/two accommodation properties for your entire trip (and explore all the things to do & see nearby).

Gina Bégin – Although she’s a Florida girl, exploration called her away after the final bell of her high school career. On a quest to reach the distant adventures of North America, she lived in her car, traveling to ski the backcountry of Alaska, sleep under the northern lights in the Yukon Territory, ice climb Colorado’s frozen canyons, photograph Nova Scotia’s coves, backpack in southern US wildernesses and munch on sugared tamarindo in the jungles of Mexico. But after three years living on the road and seeing the many wonders this continent had to offer, she chose the place she knew would fit an explorer looking for a lifetime of wild wonder: British Columbia. Dual citizenship in hand, she settled along the Powder Highway in the Selkirks and is making her home between four walls and deeply wooded mountains.