These mountains, bounded by the Rocky Mountain Trench on the east, are ancient in comparison to the Rockies. Originating over 1,500 million years ago, when the only form of life on earth was algae, it was not until the era of the dinosaurs that the Purcells acquired the Rocky Mountains as a neighbouring range.

Some 70 million years ago, when the Rockies were concluding their development, molten rock was welling up to create massive intrusions within the old metamorphic rocks of the Purcells. The erosive forces of water and glacial ice have since removed much of the weak overlying rock, revealing the solid granitic masses and chiseling them into the spectacular spires of the Bugaboo region.

The heavy snowfall of the ‘Columbia Wet Belt’ continues to support large remnants of the vast alpine glaciers that dominated and shaped the rugged Purcells in the past.

Since the Palliser Expedition of 1857 – 1860, which first traversed and named the Purcells for Goodwin Purcell, expedition sponsor, these ranges have attracted miners, loggers and some of North America’s leading mountaineers. Today the early routes, first done with many pitons and bolts for direct aid, are often largely repeated free with less damaging aluminum chocks for protection. Free climbing techniques enable faster ascents with reduced exposure to the frequent lightning storms and continually open new lines in an area where the elements of glaciers, major routes on firm rock, significant altitude and violent weather combine to create world-class challenges.

In 1969, the 358 hectare Bugaboo Provincial Park and the 24,624 hectare Bugaboo Alpine Recreation Area were set aside to preserve and protect this outstanding area of the Purcells.

In 1972, the Alpine Club of Canada erected the Conrad Kain Hut, which has since been maintained by the Parks Division as a base for climbers and to reduce visitor impact on the fragile timberline area below Snowpatch. Road access to the park is fairly easy but trails are few. Inexperienced or ill-equipped climbers or hikers should forego a visit in favour of less demanding areas.

The route from the Hut to Malloy Igloo (shelter located at Malloy Glacier) traverses a distance of approximately 13 kilometres (8 mi). Elevation change 762 metres (2,514 ft). Only roped parties should attempt the trip as several glaciers have to be crossed.

Access to the Malloy Igloo via Malloy Creek is possible. For groups of mixed experience it poses several obstacles. It is recommended you stay on the east side of the creek due to two formidable stream crossings, and gain access via a small steep gully from which the crest of the moraine can be reached. The final headwall is easier in early summer (lots of snow), but may require roped climbing later in the season.

between GOLDEN and RADIUM, BC 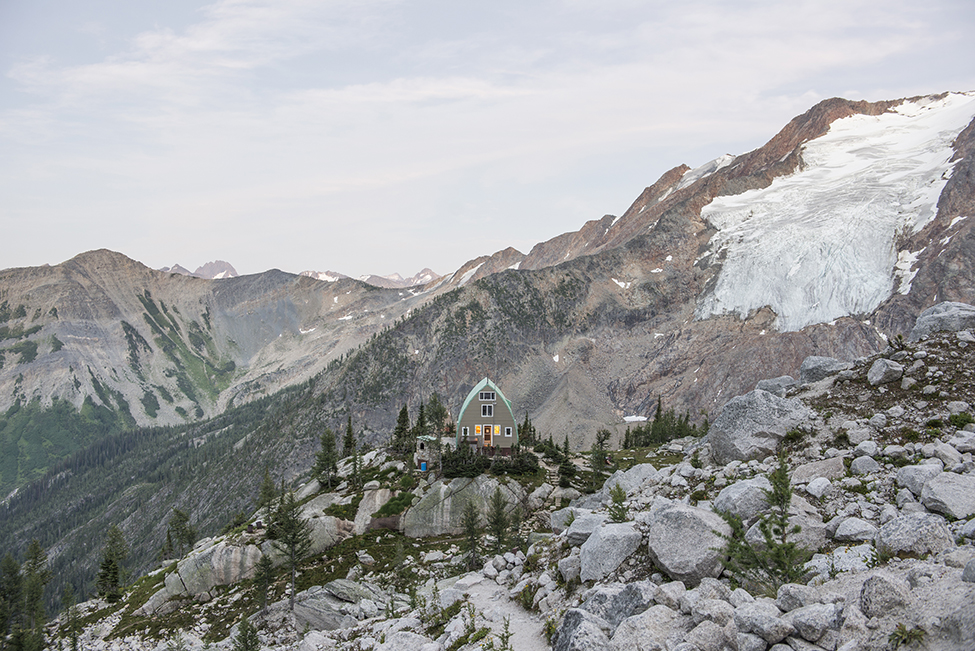