The village of Canal Flats is nestled in the region, halfway between Cranbrook to the south and Invermere to the north.  It is a place offering a number of amenities, such as a lovely public beach, walking trails and parks, dining and entertainment, and general services.

The source of the 4th largest river system in North America starts here. Bubbling out of the ground from deep springs and filling Columbia Lake with its awe inspiring jade blue green colour. The mighty Columbia River is turned loose, flowing north, then turning south and west and finally emptying into the Pacific Ocean, a journey of over 2,500 km (1,500 mi).

Fishing and ATVing is popular in this area. Canal Flats is the perfect home base while spending time on the Kootenay River, Columbia Lake, Whiteswan Lake, Finley River and Whitetail Lake. Backcountry trails into some of the most breathtaking terrain can also be accessed directly from the village.

Canal Flats is centre of one of the continent’s most interesting geographical features. It sits on a 2km strip of land separating Columbia Lake (headwaters of the northward flowing Columbia River) from the southward flowing Kootenay River. Canal Flats’ name originates from a scheme devised in the 1880s to dig a canal through the portage separating the Kootenay River and Columbia Lake. The canal, completed in 1889, was so narrow and dangerous, it was wrecked in 1902 after only two boats passed through.

The Source of the Columbia Trail winds 1.5 km through the wetlands. Just off the trail, wildflowers, insects, birds and wildlife can be seen. Poplars, spruce and willows line the pathway. Large patches of cattails and water grasses also grow as they have for thousands of years. When you reach the end of the loop, spend some time on the foot bridge. Here, many waterfowl, eagles, hawks and song birds can be seen.  Keep following the trail to its conclusion and witness the water bubbling from the ground.

Tilley Memorial Park is located at the southeast end of Columbia Lake.
(pictured above)  It has a boat ramp, picnic tables, washrooms, a beautiful beach area and wheelchair access. 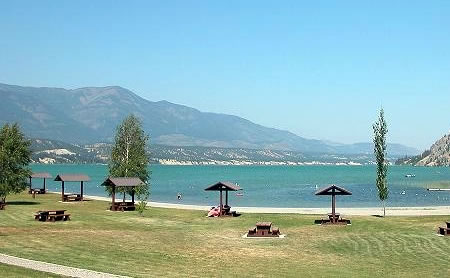 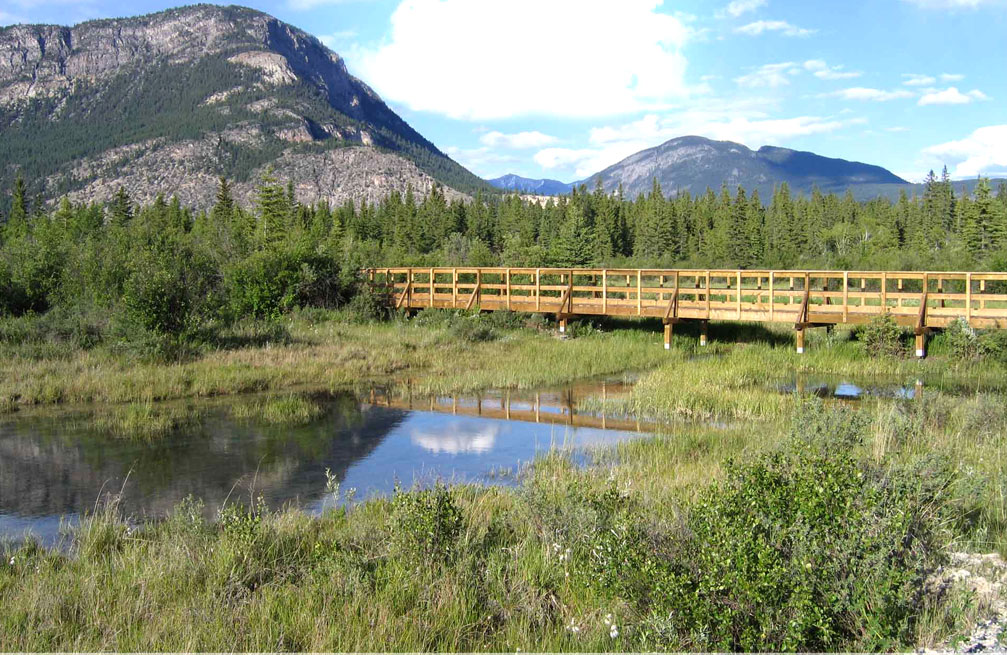 Source of the Columbia Trail.