Explore the ghost towns of the Kootenay Rockies – discover the history and tragedies of days gone by. Some towns are quite secluded and forgotten, others feature buildings which have been restored and are open to visitors.

Albert Canyon (east of Revelstoke):
Located a short distance south of the Canyon Hot Springs. Throughout the years of steam, Albert Canyon was a “pusher” station, with a small roundhouse built in 1916. There was also a CPR agent, operators and a section gang. Nothing now remains of Albert Canyon as it once was.

Baynes Lake (40 km south of Fernie):
Named after Mr. Baynes who had a small shack near the lake in 1902, when the Great Northern Railroad was built, this town once contained a Lumber Company mill, a hotel, hardware store, schools, newspaper company, nursery, 2 greenhouses, a land office and a clubhouse. The mill ceased operation in 1925; homes were boarded up with only a small community store left today to serve scattered settlers.

Beaton, Old Beaton, Arrow Park, Arrowhead, Comaplix, Renata:
Before the flooding of the Arrow Lakes valley during the 1960s, after the construction of the Hugh Keenleyside Dam, several low-lying communities were physically moved to higher ground. During fall and winter low water levels show evidence of these locations.

Brooklyn (Renata Natural Bridge) – (Castlegar):
Sixteen kilometres up river from the Hugh Keenleyside Dam, on bulldog Mountain; accessible only by boat. A trail leads up a bank to what is possibly Canada’s largest natural rock bridge. Ask local marinas for directions. The erosion sculpture is 20 m high and 43 m long, spans a cascading brook among towering cliffs some 275 m above the Lower Arrow Lake and site of early boomtown of Brooklyn – now just a field.

Bull River (20 km south of Fort Steele):
The origins of Fort Steele can be traced back to the small settlement of Galbraith Ferry born during the 1864 Kootenay Gold Rush. Today, over 60 restored or reconstructed homes and buildings are waiting to take visitors back to yesteryear at Fort Steele Heritage Town.

Cascade (near Christina Lake):
As the railway approached Christina Lake, it curved along the bluffs and gradually angled to lake level where it crossed the Kettle River on a bridge 304 m (1,000 ft) long. Construction headquarters for Christina Lake was established at the boom town of Cascade City. This land was owned by Aaron Chandler, an American from North Dakota and he began selling lots to businessmen who foresaw the coming of the railroad and Cascade sprang into existence with stores, hotels and livery stables. In 1899, the first locomotive chugged over the Kettle River Bridge into Cascade City. Shortly after, the city was devastated by fire. Now only the graveyard remains and it is hard to find.

Coal Creek (Fernie): Follow the Coal Creek Heritage Trail – it’s an easy to moderate seven kilometre (4mi) trail that begins at the gazebo by the Fernie Aquatic Centre. The trail follows an abandoned railway line and road grade to the ghost town of Coal Creek, a once bustling mining community of  up to 1,000 residents form 1898 to 1958.  Walk, jog or mountain bike this trail and enjoy the splendor of nature while discovering the rich heritage of the area.  All that remains of the townsite are ruins to explore, as many of the buildings were either burned down in a fire or moved to Fernie after the Coal Creek mine shut down. For the full story, visit the Fernie Museum.

Cody (near Sandon):
Two kilometres from Sandon lies the ghost town of Cody, an 1890s era village of over 150 residents, hotels, businesses and “end of the line” for the Kaslo & Slocan Railway. Today, the remains of a concentrator mill and the old K&S Railway stationhouse mark the site of the once-thriving community.

Corbin (near Sparwood):
The coal town of Corbin was once the centre of a huge strip mining operation known as “The Big Showing”. Remains can be found off Hwy 3 near Sparwood. The town expired abruptly when labour troubles between the collieries and the local union turned into a full scale riot in which many were injured before order was restored.

Donald (North of Golden):
Once a construction centre and divisional point for the CPR. Some lumbering took place here; it was the chief town of the area in 1889. The divisional point moved to Revelstoke in 1897; buildings at Donald were torn down and moved to other towns.

Erie:
When Daniel Corbin built the Nelson and Fort Sheppard Railway to Kootenay Lake in 1893, he also organized the Kootenay Land Company. Reflecting the optimism of the times, he laid out townsites called Beaver (later changed to Fruitvale), Erie, Salmo and Quartz Creek (later changed to Ymir). There was little activity in any of them for the first 4 years but after 1896, the gold properties captured the attention and they became thriving villages. Today, Ymir, Salmo and Fruitvale are supported by surrounding logging and farming, but Erie was not so fortunate.

Fisherville (East of Fort Steele):
Visitors can take a step back to 1864 when this area was a bustling flurry of activity. Gold was found in Wild Horse Creek during that time and thousands of people journeyed here hoping to find the mother lode. All that remains today are remnants of old graveyards and mining activities.

Fort Shephard:
This post was developed for fur brigade purposes and was situated on the west side of the Columbia River. Construction of the post began in 1856 and soon two warehouses, a storehouse, officers’ lodgings and quarters for the men were developed. Trade flourished for a brief period in the 1860s during the gold rush.

Fredericton:
The discovery of copper-silver deposits on Toad Mountain by the Hall brothers in 1886, led to the development of the Silver King Mine. A community that appeared on the lakeshore was named Salisbury, then Nelson, while at the mine head a town known as Fredericton housed miners and their families. The mine closed in 1902 and before long Fredericton disappeared.

Kuskonook:
On the east shore of lower Kootenay Lake, this town flourished and died because of railway rivalry. In 1898, the CPR was laying track westward from Lethbridge through the Rockies in an effort to reach the area’s mines. In November, CPR crews arrived at the foot of Kootenay Lake to discover the U.S. railway builders were already there. Canadian Pacific built its wharf and transfer point at Kootenay Landing (1 mile west) leaving Kuskonook to the Americans. At its peak, the village had 100 residents, a general store and five hotels.

Lumberton (15 km south of Cranbrook):
Once known as Watts or Wattsburg, this town was run by A.E. Watts, the founder and owner of the lumber mill that was the life blood of the 225 residents. Eventually, the hills nearby became barren of timber and Lumberton was closed down. The cement wall of its mill rising above the ruins and foundations of long dismantled homes are all that remain.

Pilot Bay:
The decision to build a smelter at Pilot Bay to smelt the rich ores of Riondel (Blue Bell) was made in 1891 and was almost instantly surrounded by the Pilot Bay townsite. The smelter operated for less than 2 years and was then closed due to low silver prices and high fuel costs. There’s a short hike to the site of both the Pilot Bay community and Smelter. Remnants of smelting apparatus can be seen scattered about.

Retallack:
On Highway 31A, midway between New Denver and Kaslo, you’ll see abandoned buildings which mark the former townsite of Retallack, a thriving mining and sawmill town in the 1890s. Today, it’s home to a resort featuring fine dining and the Ancient Cedar Trail.

Sanca:
Sanca is one of the oldest settlements on Kootenay Lake. Located just south of Crawford Bay on Hwy 3A, was once a gold-rush town of 1,500 miners.

Sandon:
This once thriving heart of the Silvery Slocan mining region, now a renowned historic site, is a must-see for any visitor to the area. Sandon is located 13 km east of New Denver or 43 km west of Kaslo.

Waldo (47 km southwest of Fernie):
Once a lumbering town in 1902 with 2 mills, 2 company stores, church, post office, poolroom, 2 hotels, 2 garages, large school and independent store, bunkhouses, mess halls and homes for 600 people. Waldo died with the mill’s closing and then in 1926 fire destroyed the entire community except the church and 6 homes; these were destroyed in a flood in 1972.

Waneta (near Trail):
Bridging the Pend Oreille River (1893) was a big job demanding the construction of a steel cantilever span 250 ft (75 m) long. The project took six months with workmen living in a camp known as Boundary City. With saloons, dance halls and gambling tables, it boasted 1,200 occupants. Once the bridge was complete, construction crews began laying railway track northward from the border and a new community called Waneta appeared.

Wardner (35 km southeast of Cranbrook):
Wardner was a lumbering town in the 1920s. It consisted of a lumber mill, 2 hotels, 2 general stores, 2 garages, post office, police station, church, cafe and homes. The town died in 1933; all that remains are 2 stores, the post office and a church.

Zwicky:
Near Kaslo, on a flat where the south fork of Kaslo Creek joins the main street, a small townsite was laid out in 1892 and named Nashville. When the CPR took over the Kaslo & Slocan Railway in 1914, the settlement was named Zwicky, after the manager of the Cork-Province Mine. Today, Zwicky consists of only a couple of dilapidated log cabins. 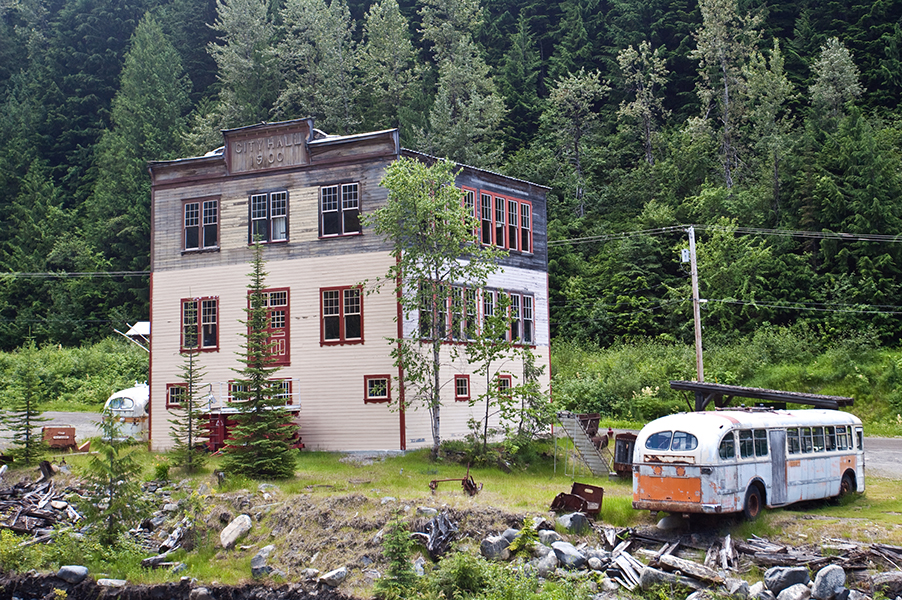